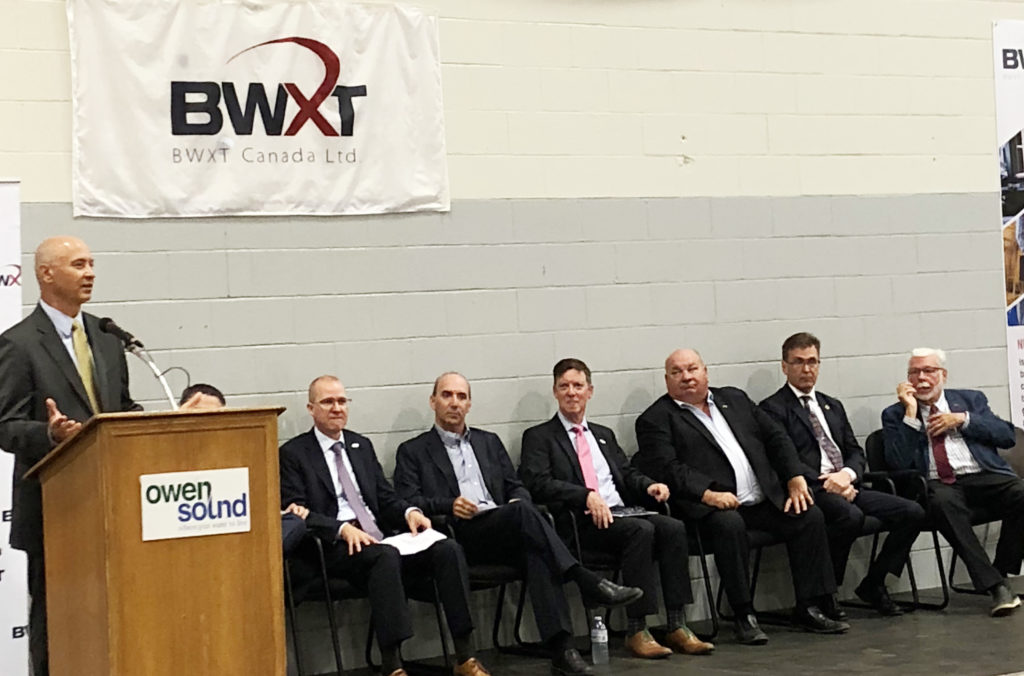 Mike Rencheck, Bruce Power's President and CEO, gives opening remarks during an announcement on Aug. 16, 2018, by BWXT Canada and Brotech Precision CNC that they will open manufacturing facilities in Owen Sound to support the Bruce Power Life-Extension Program. The announcement is expected to create up to 50 jobs.

“We are pleased to announce today that BWXT and Brotech Precision CNC have taken up residence in Owen Sound, with plans to create well-paying, highly-skilled jobs over the next several years,” Rencheck said. “It is a great win for the City of Owen Sound, and an example of how our local economic development initiative is supporting growth across our region by repurposing underutilized facilities to bring new life and new energy into our communities. These commitments, and growth in our regional economy, help Bruce Power continue providing clean, reliable, low-cost power, and, after two years, executing our Life-Extension Program on schedule and on budget.”

The 66,000 square foot BWXT facility, located at 1875 16th Ave. E., will be used for nuclear component manufacturing. The facility will be operational in November 2018, and will accommodate 30 to 50 local hires in positions such as welding, inspection and assembly.

“We are pleased to broaden the BWXT footprint to include Grey County and bring jobs to the City of Owen Sound,” said John MacQuarrie, President of BWXT Canada Ltd. “Today’s announcement is an example of the many benefits offered by Bruce Power’s Life-Extension Program – from economic development to carbon-free and reliable power for Ontarians.”

In addition to opening its new facility, BWXT is also supporting Georgian College’s Owen Sound campus with a new bursary award in recognition of the school being a key supplier of talent for the region.

Brotech Precision CNC also announced today that it is opening a new facility in the same building in Owen Sound, in the fall, to support its long-term partnership with Bruce Power. Its facility is approximately 10,000 square feet of space that will be used for component assembly, testing, and CNC machining, with an option for more space as required. The company plans to develop a team at this location to support Bruce Power’s various CNC machining requirements.

According to Vice-President, Jerome Horowitz, “This move is a perfect fit. Over the past 22 years, we have grown our skills in partnership with Georgian College and the Apprenticeship program. We intend to work in the same way in this region – it’s a win-win.”

Brotech is forecasting four jobs for skilled personnel in the first year of operations.

“Bruce Power will continue to need CNC machining skills to support the MCR as well as ongoing operations,” said Brian Wetherall, Brotech’s President. I think we will see excellent job growth after the first year as we develop the partnerships in the community further.”

Bill Walker, MPP for Bruce-Grey-Owen Sound, congratulated BWXT and Brotech for their local investments and emphasized the important role the nuclear industry continues to play in the province.

“These private sector investments in the Owen Sound region mean not only good, local jobs, but low-cost electricity for decades from Bruce Power,” MPP Walker said. “The Ford government is committed to the role Bruce Power nuclear generation plays in Ontario as a source of stable, low-cost electricity that creates jobs and is a global supply of life-saving medical isotopes. It’s only through the stable policy our government is committed to that make these kinds of investments possible, and we are committed to that stability for our nuclear industry and specifically Bruce Power, and the ripple economic effect that benefits the province.”

Ian Boddy, Mayor of Owen Sound, was also there to welcome BWXT and Brotech on behalf of council and staff. He expressed the city’s gratitude for Mike Rencheck, James Scongack, Bruce Power’s Vice President, Corporate Affairs & Environment, and the local economic development team for their ongoing commitment to the greater region.

Stewart Halliday, Grey County Warden, was also thrilled to welcome BWXT and Brotech to Owen Sound and highlighted the impact these new employers would have across the county, through rewarding employment and more economic stimulation for the local towns and businesses. He concluded by stating that Grey County will continue to advocate for the region, with BWXT and Brotech’s success setting an example for more prospective Bruce Power suppliers to call the region home.

About BWXT
BWXT Canada has over 60 years of expertise and experience in the design, manufacturing, commissioning and service of nuclear power generation equipment. This includes CANDU ® and Pressurized Water Reactor steam generators, heat exchangers, nuclear fuel and fuel components, other critical plant components, parts and related plant services. Headquartered in Cambridge, Ontario, BWXT Canada has approximately 1,250 employees at locations in Cambridge, Peterborough, Toronto, Kanata and Arnprior, Ontario and Vancouver, British Columbia. BWXT Canada is a subsidiary of BWX Technologies, Inc. (NYSE:BWXT). BWXT is a leading supplier of nuclear components and fuel to the U.S. government; provides technical, management and site services to support governments in the operation of complex facilities and environmental remediation activities; and supplies precision manufactured components, fuel and services for the commercial nuclear power industry. Learn more at www.BWXT.com. BWXT has been a key supplier to Bruce Power for over 40 years, providing nuclear components, critical engineering and field services. BWXT has supplied every original and replacement steam generator and fuel handling system ever commissioned at the site and delivers critical plant and project services on a regular basis. In July 2018, BWXT announced it had entered into a development agreement with Bruce Power to collaborate on the development and supply of medical isotopes – further broadening their commitment to this longstanding and successful relationship.

About Brotech Precision CNC
Brotech was established in 1995 and today serves the Nuclear, Aerospace, Defense, Medical, Oil & Gas and Automotive industries. The company employs over 50 people and its products are exported globally. More information can be found at http://www.brotechprecisioncnc.com

Besides the ultra-high precision work done by Brotech, another special feature of the company is the training ground it has become for young CNC machinists. While many companies in the industry have been stifled by the skilled labour shortage, Brotech has been growing by working with the Simcoe County school boards to groom apprentices, and with Georgian College to groom co-op students and graduates.

About the Economic Development and Innovation Initiative
In 2016, Bruce Power and the County of Bruce launched a regional economic development initiative to facilitate the expansion of Bruce Power Suppliers into the region. This initiative was in response to Bruce Power’s multi-billion dollar, multi-year Life Extension Program and includes Grey and Huron Counties in its engagement and delivery. More information on the initiative can be found at www.brucepower.com/suppliers.