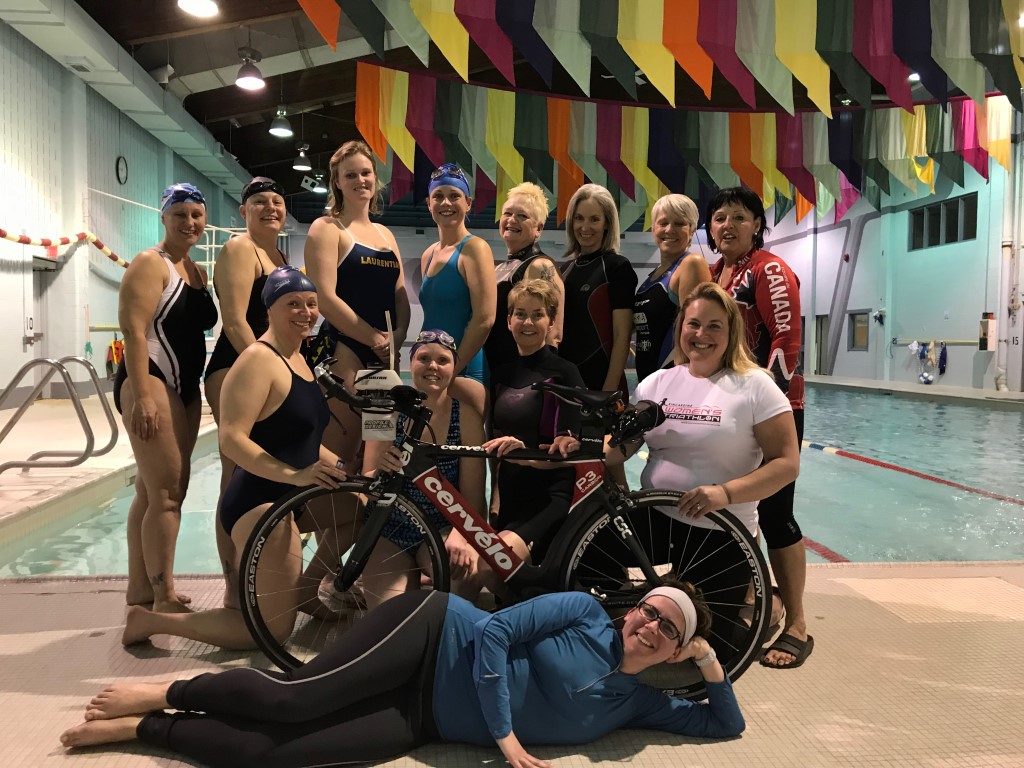 Over the years, thousands of women have participated in the Kincardine Women’s Triathlon (KWT), which is going into its 18th year this July thanks to an army of race volunteers and supporters (including Bruce Power, who this year donated $1,000 to the 2018 race).

When I first lived in Kincardine in the early 2000s, I knew about the women’s triathlon, but never thought I’d be a participant in it. I couldn’t swim. As for running and biking, I was a smoker (enough said). Then I moved back to Kincardine in 2014 and a colleague mentioned that the KWT also has a duathlon, which is two runs with a bike in the middle.

I had changed since the last time I lived here. I was a quasi-runner, and I biked to work when I lived in Toronto. The duathlon was something I could do. Sadly, I was too late for that year’s race. (Registration opens on New Year’s Day each year, and sells out typically within hours).

In 2015, I overslept and forgot to register. That year, I volunteered to be on the bike course where I kept vehicular traffic off the course and cheered on the participants. I decided then that 2016 would be my year.

And it was. I remembered to register on New Year’s Day and then on July 9, there I was on my yellow Cruiser (basket removed, thank you very much), trying to accomplish something I never thought I would. I did it.

This year marks my third year as a participant in the duathlon. My husband tried to encourage me to try the full triathlon, but knowing how poor I am when it comes to water (especially cold lake water), I thought it best I stick with dry land and what I know (but I did get a real road bike for this year’s race — even though I love my yellow Cruiser).

However, my work colleague Megan Adams is planning to do her first triathlon this year at the Kincardine Women’s Triathlon. She’s been doing weekly swimming sessions in Kincardine through a program dedicated to individuals interested in triathlons and wanting to learn the proper swim technique.

“The course is amazing; the energy is high with lots of spectators cheering you on throughout the course. I have competed for the past six years in the duathlon as running and biking were comfortable for me. This year I decided to step out of my comfort zone and sign up for the swim making this my first triathlon.

“I am thankful we have a swim program that exists like this in Kincardine as it made my decision to sign up for the tri a little easier knowing I will always have someone to swim with and learn from. The swim program is built for all swimmers from beginners to advance and is an opportunity to get into the pool once a week, and then take what you have learned and as a group together practice an open water swims before the event.

We are less than two months away from the triathlon and each week I feel more confident in the water.”

I’ve run a number of other races over the years, but nothing compares to the Kincardine Women’s Triathlon. It’s a race where participants actively cheer one another on as they go. It’s one of the friendliest races I’ve ever participated in.

We’re so lucky to have it in our community.

The 2018 Kincardine Women’s Triathlon is on Saturday, July 14. Come out and cheer on the participants if you’re in Kincardine.