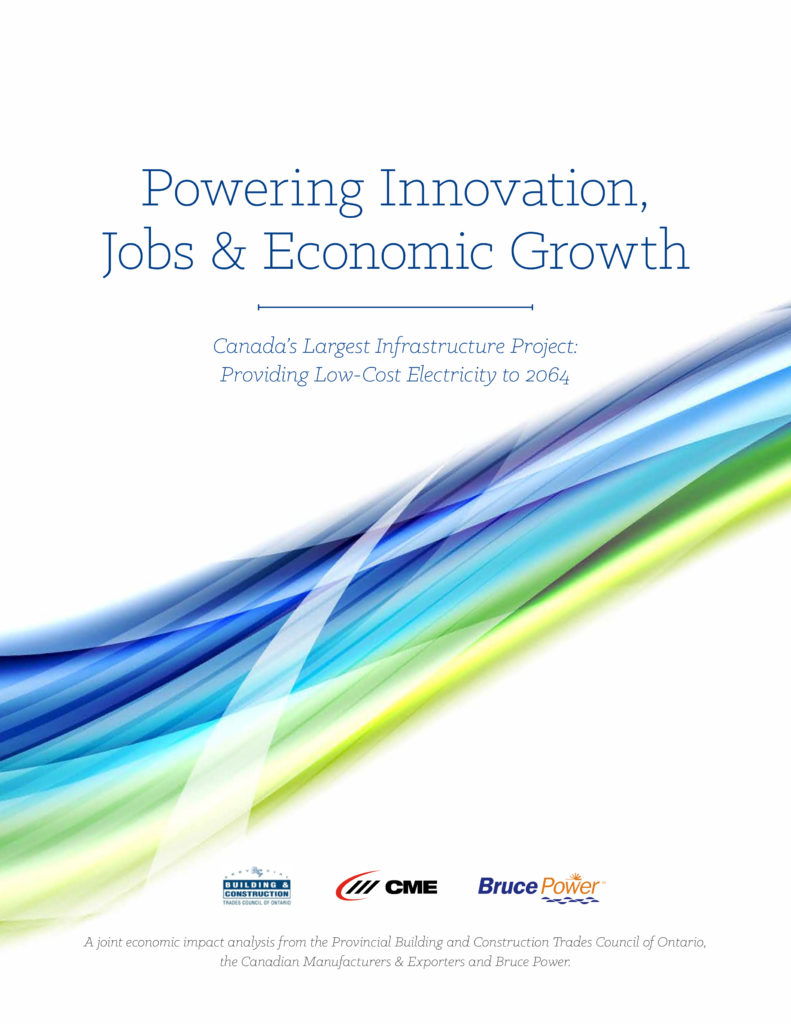 ‘Powering Innovation, Jobs & Economic Growth’ takes an in-depth look at how extending the life of the Bruce Power site to 2064 will positively impact the people of Ontario through low-cost, reliable, carbon-free electricity, as well as the continued investment in jobs and the economy.

The report – a joint effort between the Canadian Manufacturers & Exporters, the Provincial Building and Construction Trades Council of Ontario, and Bruce Power – shows that 22,000 Ontario jobs will be created and sustained directly and indirectly through the Bruce Power Life-Extension Program every year, while $4 billion in domestic economic benefit will be realized through the direct and indirect spending on operational equipment, supplies, materials and labour income annually, said Mike Rencheck, Bruce Power’s President and CEO.

“Ontario’s businesses and families are counting on Bruce Power to provide low-cost, carbon-free electricity through to 2064, which we currently do at 30 per cent less than the average cost to produce residential power,” Rencheck said. “As we progress through our Life-Extension Program – which remains on time and on budget – we are doing more than powering a third of the province, we’re creating and sustaining thousands of jobs, and injecting billions into Ontario’s economy every year.”

Patrick Dillon, Business Manager and Secretary Treasurer of the Provincial Building and Construction Trades Council of Ontario, said the Life-Extension Program, which includes replacement of major components on six of the Bruce site’s eight nuclear reactors between 2020 and 2033, is exactly the kind of commitment and investment that helps train Ontario’s skilled trades workforce.

“Over the next 15 years, during Bruce Power’s Major Component Replacement Project, the company will invest $980 million to $1.2 billion private dollars in labour income every year, and create $751 million to $1.07 billion in annual economic benefit through equipment, supplies and materials, both directly and indirectly,” Dillon said. “There is no single, well-established facility or infrastructure project in Canada that will have such a significant economic impact.”

Dennis Darby, President and CEO of the Canadian Manufacturers & Exporters, said low electricity costs are a priority for the members of his organization.

“Manufacturers require reliable and low-cost power to remain competitive on Canadian and global markets,” Darby said. “Bruce Power providing electricity at below-average cost is a step in the right direction to enhance the competitiveness of the manufacturing sector in Ontario.”

“The jobs, investment and economic impacts will make a significant overall contribution to the economy, and are critical to providing a stable foundation for economic growth in southwestern Ontario,” Rencheck added.