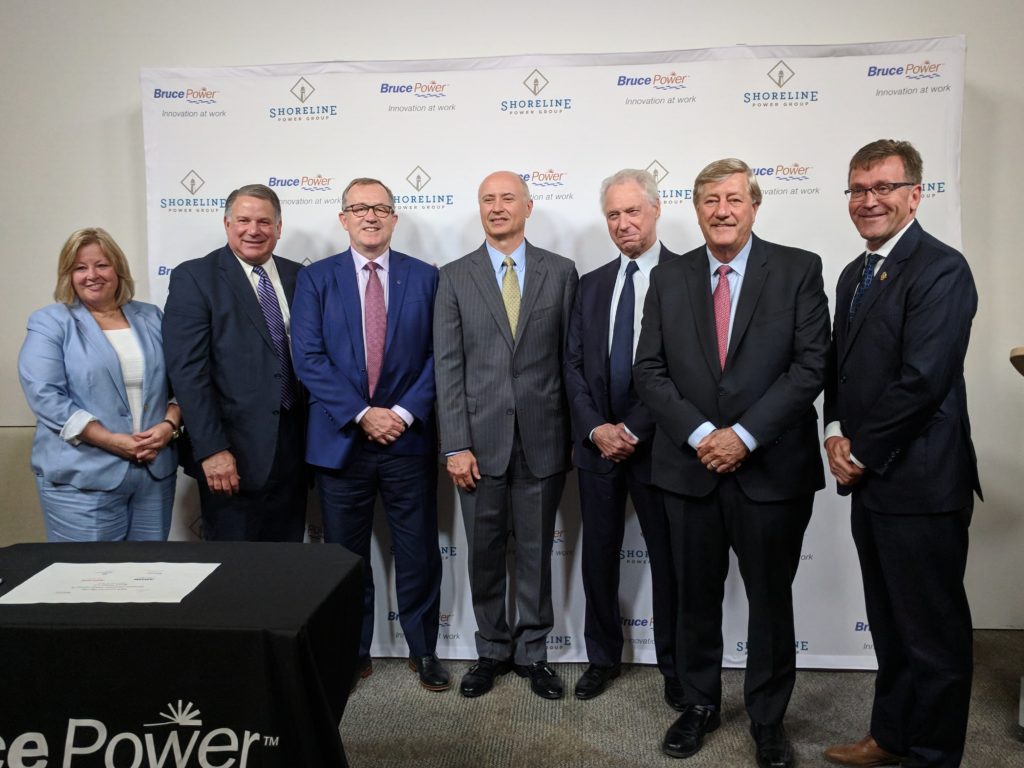 TIVERTON, ON – June 14, 2018 – Bruce Power has signed a key contract for its Major Component Replacement (MCR) Project with the Shoreline Power Group Consortium, which will be responsible for successfully executing the heart of the company’s multi-year Life-Extension program, which started in 2016 and remains on-time and on-budget.

Starting immediately, the Shoreline Power Group – a consortium of Aecon, AECOM and SNC-Lavalin – will begin to mobilize for the heart of the MCR project known as the reactor retube, which will commence with Unit 6 in January 2020. Through demonstrated success, the contract has the potential to expand to reactor retubes on Units 3,4,5,7 and 8 as well. This is will create and sustain an average of 825 jobs annually – with a peak of 1,500 – directly and indirectly, over the next 15 years in Grey, Bruce and Huron counties, and throughout Ontario.

“As Canada’s largest Public-Private Partnership, Bruce Power will continue to meet all investment requirements related to this multi-year program, and, through continued strong and efficient performance, will provide low-cost power to the province through 2064,” said Mike Rencheck, Bruce Power’s President and CEO. “We are making this key contract award today with the confidence that the members of the Shoreline Power Group have demonstrated the experience, commitment and dedication to safety, quality, productivity and innovation to enable us to keep our Life-Extension Program on time and on budget.”

Bruce Power is a low-cost electricity provider that powers more for less, delivering 30 per cent of Ontario’s electricity at 30 per cent less than the average cost to generate residential power. Bruce Power’s role has been recognized by a range of independent experts, business groups and energy experts in recent years. For example, in 2017, Ontario’s Financial Accountability Office (FAO) released a report on the life extension of the province’s nuclear fleet. The report concluded, “There is currently no portfolio of alternative low emissions generation which could replace nuclear generation at a comparable cost.”

John M. Beck, President and CEO, Aecon Group Inc., said the Shoreline Power Group consortium recognizes the first-rate expertise the companies have in the nuclear industry and that the success of these projects are ultimately about generating low-cost, stable and reliable power for families and businesses.

“The Shoreline Power Group looks forward to leveraging its extensive experience and lessons learned from delivering nuclear refurbishment projects across the province to execute this work with the highest level of safety and quality, while we also recognize the need for ongoing innovation and building efficiencies as we move through this multi-year program,” Beck said.

“I’m thrilled that a company based in Huron-Bruce is leading the way on this front as a public-private partnership that is delivering results,” MPP Thompson said. “The Ontario PC Party remains firmly committed to the Bruce Power refurbishment program and, with their multi-year contract in place and private sector funding to drive this program, I believe the best thing we can do is support them in terms of good policy, but when it comes to the day-to-day operations stay out of their way and let them do what they do best – generate low-cost power.”

For this historic announcement, the company was pleased to welcome as a guest speaker former Ontario Premier Mike Harris. Harris was Premier from 1995 to 2002 and, under his administration, Bruce Power was formed in 2001 as a public-private partnership, with the goal to revitalize the facility and position it for long-term sustinability and success.

“It wasn’t that long ago that the Bruce site was a facility with only half of its units operating with an end of life in 2018,” the former Premier said. “In fact, without the transformation Bruce Power has undertaken since 2001, we would be standing today at a facility with all of its units shut down. I’m pleased that, through the public-private partnership between the province and Bruce Power, we have a very different future today. All eight units are generating low-cost power for families and business, and this private-sector investment program will allow the company to do this for many decades to come. Bruce Power is a true Ontario success story.”

Mark Romoff, President and CEO of the Canadian Council of Public-Private Partnerships, said today’s announcement between Bruce Power and the Shoreline Power Group is a great example of the public-private partnership model at work.

“Using private investment dollars, thousands of highly skilled jobs are being created while ensuring a supply of low-cost electricity for the people of Ontario for decades,” Romoff said.

The Shoreline Power Group contract announced with Bruce Power today is worth $475 million for Unit 6, will be funded in totality by Bruce Power, and will continue on successive units based on safety, quality, cost and overall performance.