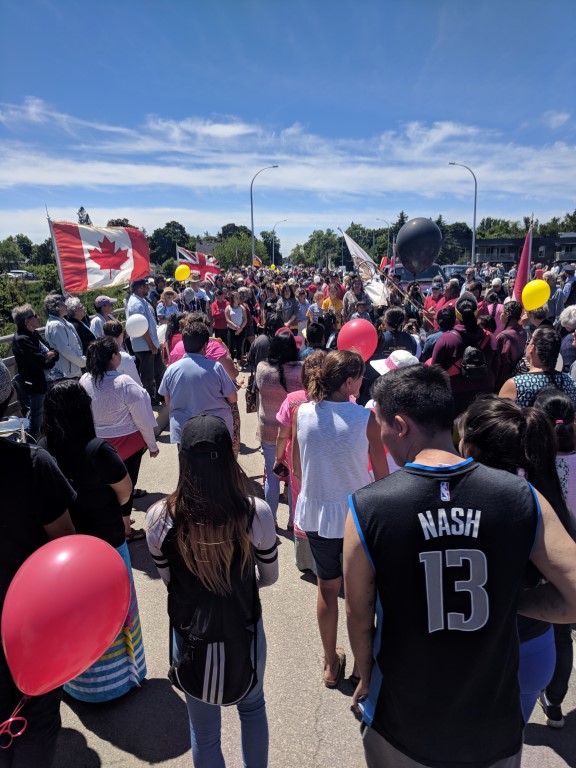 Today Saugeen First Nation held a day-long celebration at GC Houston in Southampton in recognition of National Indigenous Peoples Day. Part of the festivities was the Southampton bridge renaming (pictured) to Zgaa-biig-ni-gan Bridge which means “We are connected.”

I work in Corporate Affairs at Bruce Power as a Communications Specialist focusing on supporting the relationship between Bruce Power and Indigenous communities and people.

Over the last five years, my role has evolved as the relationship has grown. I spend four to six days a month in the communities of Saugeen and Neyaashiinigmiing working with community members on various initiatives that are beneficial to the communities and that Bruce Power sees as opportunities for investment and engagement.

Some of the key focus areas we share with the communities are on youth development, education and training and health and wellness of the communities. It’s important that Bruce Power recognizes this work, as our company is located on the Traditional Territories of the Saugeen Ojibway Nation – which consists of Saugeen and Neyaashiinigmiing. Of the 13 years I’ve been at Bruce Power working in various roles across the company, the last five years have been the most meaningful and rewarding because I’m supporting the flow of benefits to my own people.

Part of my responsibilities includes coordinating the annual Corporate Indigenous Peoples Day celebration on site. This day involves inviting between 50-100 community members to site to share our indigenous culture with our workforce through dancing demonstrations, drumming, singing, displaying artisanal items and cultural pieces and providing food samples. GC Huston Public School’s participation is an integral part of our celebration on site as they constitute the majority of our dancers and they bring their drum group out.

When I was growing up and in grade school, I never knew of non-Indigenous people gathering to celebrate and learn about my culture. That’s all changing now — particularly as a result of the work of key people who are leaders in their field, who have a passion for tolerance, acceptance and uniting people.

The principal of GC Huston, Dan Russell, is a true example of someone who has worked tirelessly to change the attitude of Indigenous culture for the better. Through his eight years at the school, Dan worked to eliminate cultural boundaries to the point of when you walk into GC Huston today, you see and feel the local Indigenous culture throughout the school with the Ojibway language on posters and being spoken as you’re greeted by the staff and students, Indigenous and non-Indigenous alike.

Nothing makes me happier than to know that my young children are growing up in a new time where they won’t know what it’s like to be told our culture is “no good” or “wrong.” Where they won’t be ashamed of who they are or where they come from. And where their culture is admired rather than shunned.

They are proud to be Anishinaabe and they are learning the Ojibway language, traditions and ceremonies, right alongside their non-Indigenous peers. This is the change that we need to support and encourage as parents, to make the world a better place for our kids and grandkids.