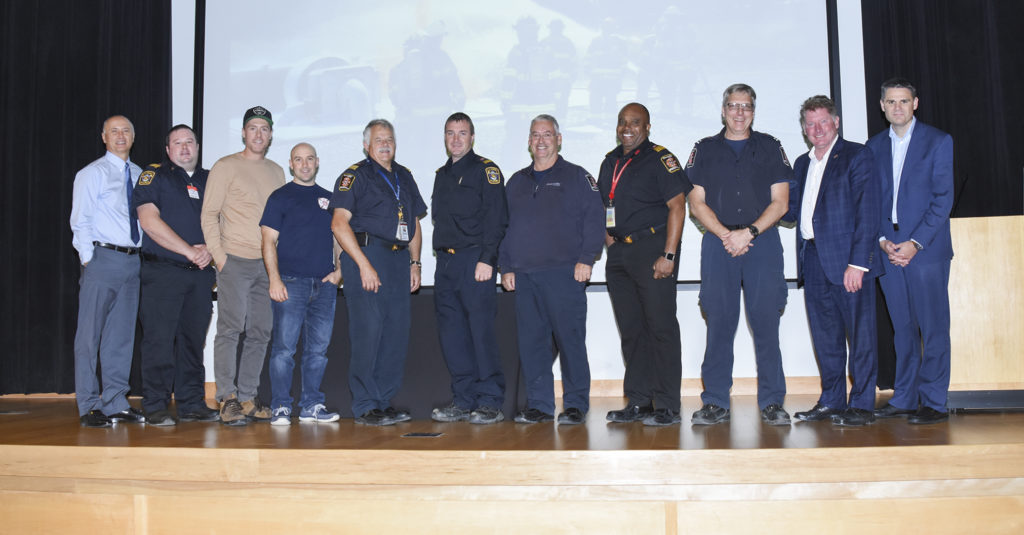 Bruce Power held a recognition luncheon for volunteer firefighters today, while announcing the expansion of its training agreement with local fire departments.

“Bruce Power has dozens of employees who volunteer with their local fire department, and we’re happy they take the knowledge they gain at work back to their communities,” Scongack said. “To this end, we felt it was important to allow firefighters in Bruce, Grey and Huron to hone their skills at our fire training facility.

“At Bruce Power, our Number 1 priority is safety first, and we want that goal to extend to the first responders in our communities as much as possible, so improving municipal access to our state-of-the-art facility was a natural progression.”

Bruce Power’s opened its $25 million fire training facility in 2015. It includes a mock-up of a turbine generator, which allows firefighters to practice in realistic scenarios. Propane-fuelled props, producing fire and smoke, simulate a variety of situations, and thermal cameras, located throughout the building, capture video footage and stream it back to a central control room. The main building, which can be used year round, also features a 50-foot tower for high-angle rescue training. There are also a number of outdoor fire simulators including a car, forklift, and transformer.

About Bruce Power
Formed in 2001, Bruce Power is an electricity company based in Bruce County, Ontario. We are powered by our people. Our 4,200 employees are the foundation of our accomplishments and are proud of the role they play in safely delivering clean, reliable, low-cost nuclear power to families and businesses across the province. Bruce Power has worked hard to build strong roots in Ontario and is committed to protecting the environment and supporting the communities in which we live.