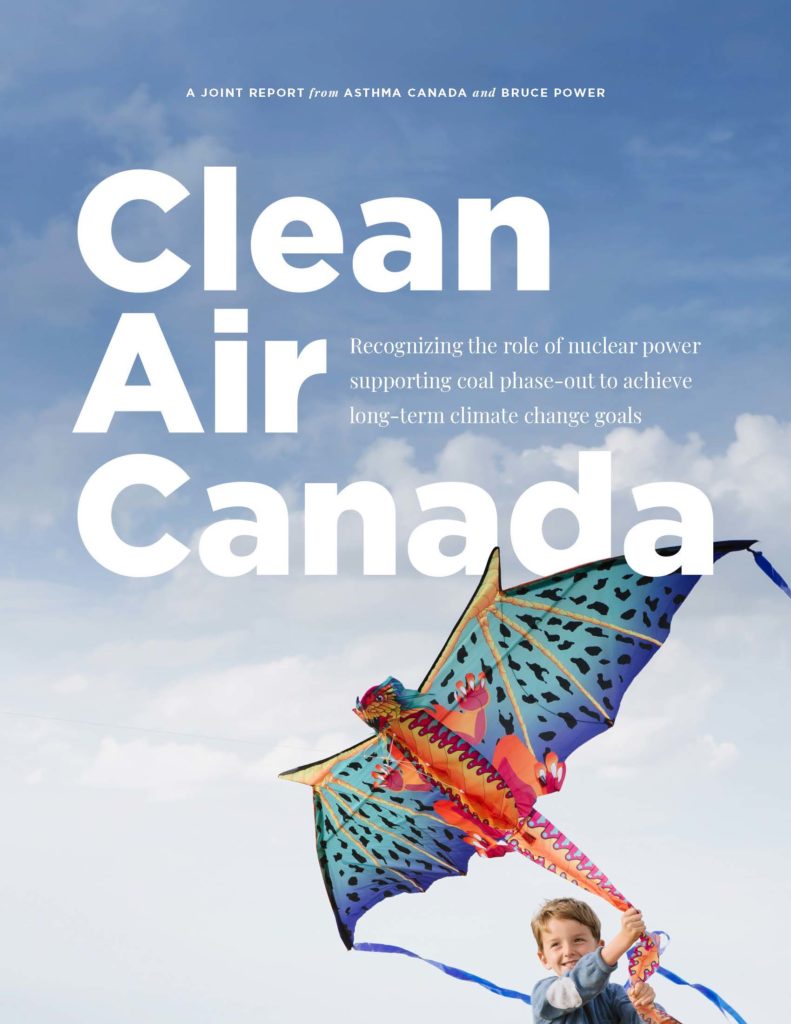 Bruce Power, in partnership with Asthma Canada, today released a report titled Clean Air Canada: Recognizing the role of nuclear power supporting coal phase-out to achieve long-term climate change goals. The report highlights nuclear power’s integral role in helping Ontario transition away from burning coal for electricity, and urges other provinces and jurisdictions to follow Ontario’s lead to improve the quality of life for people who live with asthma, allergies and other respiratory illnesses.

In the early-2000s the Ontario government committed to phasing out coal from its energy mix portfolio – a goal met in April 2014 thanks in large part Bruce Power, which returned four units to service between 2003 and 2012, providing an additional 3,000 megawatts of carbon-free electricity to the provincial grid.

“The refurbishment of the four Bruce Power reactors provided 70 per cent of the power the province needed to shut down coal stations once and for all,” said Mike Rencheck, President and CEO, Bruce Power. “Meeting energy demands in a clean and affordable way is possible, and Ontario is a perfect example of how.”

Ontario’s phase out of coal led to a significant reduction in the province’s level of harmful GHG emissions, causing the number of smog days to plummet from 53 in 2005 to just two since 2014. The people of Ontario now have cleaner air from cleaner energy, thanks in large part to the pursuit of a combination of nuclear and renewable energy sources, as well as conservation efforts.

“Air pollution affects us all – it is not limited to the borders of provinces or countries, and it is up to each of us to ensure we pursue choices that reduce air emissions,” said Vanessa Foran, President and CEO, Asthma Canada. “Through its commitment to nuclear and other non-GHG emitting energy sources, Ontario is leading the way, but this was just the first step, and there is plenty of work left to do. By co-authoring this report with Bruce Power, we are leveraging a partnership between two organizations that are focused on combating climate change and ensuring Canadians have cleaner air to breathe for future generations.”

In Canada and around the world, almost 80 per cent of GHG emissions from human activities come from energy consuming activities such as transportation, energy and electricity production, heating and cooling of buildings, operation of appliances and equipment, production of goods, and the provision of services.

Kim Rudd, Member of Parliament for Northumberland-Peterborough South, stressed Canada’s commitment to the Paris Agreement and how its transition to a low-carbon economy has already begun.

“Long-term planning with non GHG-emitting sources, including nuclear power, sets Canada up for success by allowing us to invest in innovation in the new clean-growth economy,” MP Rudd said. “Ontario undertook a multi-year effort that not only decreased the average Ontarian’s environmental footprint, but also resulted in an economic benefit to the province. It is critical for other provinces and jurisdictions to follow Ontario’s lead.”

About Asthma Canada
Asthma Canada is a national organization that provides evidence-based, asthma information, education, management tools and support programs for all Canadians living with asthma. Asthma Canada continues to expand and improve its collection of educational resources for campaigns such as the September Asthma Peak. More information about Asthma Canada’s programs and services can be found at www.asthma.ca.