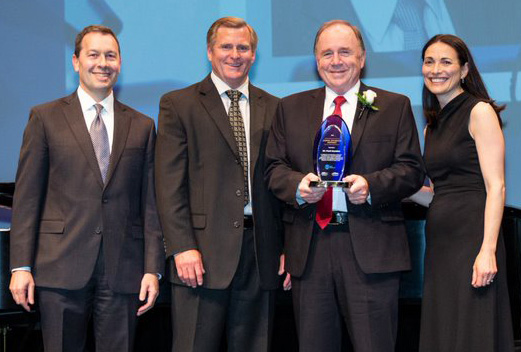 Saunders, who has served as Bruce Power’s Vice President Nuclear Oversight and Regulatory Affairs since May 2001 and is also the first President of the Nuclear Innovation Institute, received the award in Ottawa at the CSA Group’s Annual Conference. The CSA Group is a global organization dedicated to safety, social good and sustainability, and is a leader in standards development, and in testing, inspection and certification in Canada, the United States, Europe and Asia.

Saunders has participated in many CSA initiatives and committees along with numerous task forces, and is seen as an influential figure for changing the face of the CSA’s nuclear program and improving the overall value of the Group’s nuclear standards program. His work as an advocate in the development and use of CSA standards has brought him accolades from his peers across the Canadian nuclear industry.

“On behalf of everyone at Bruce Power, I congratulate Frank on this prestigious honour,” said President and CEO Mike Rencheck. “Frank has long been respected across the nuclear industry for his professionalism and integrity, and as someone who not only is an advocate for our business but is constantly looking for ways to improve it.”