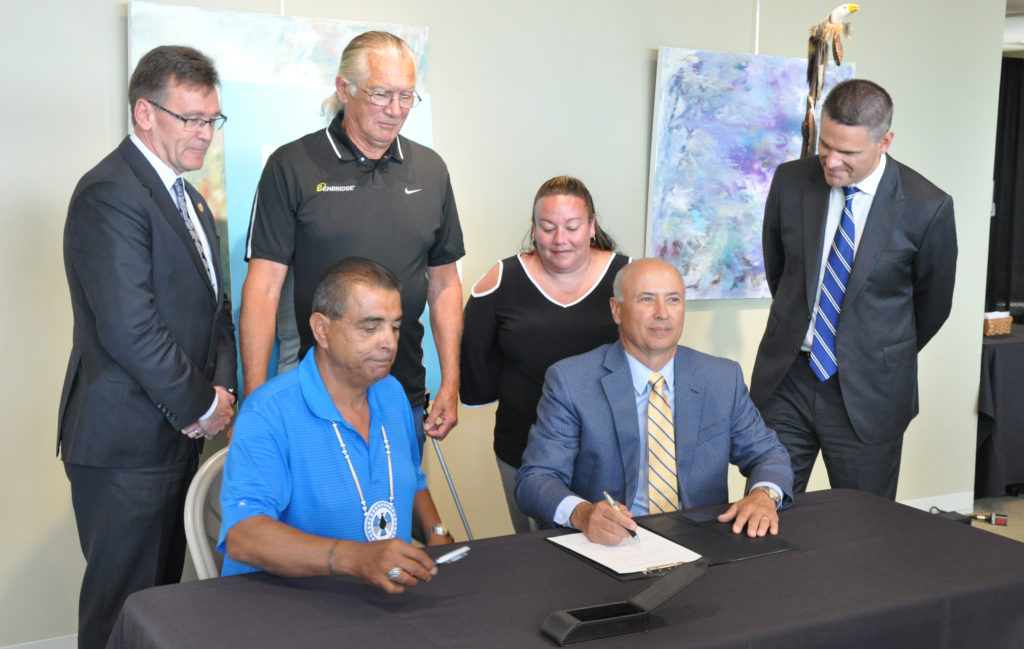 The Saugeen Ojibway Nation (SON) and Bruce Power have entered into a collaboration agreement to jointly market new isotopes in support of the global fight against cancer while also working together on creating new economic opportunities within the SON territory by establishing new isotope infrastructure.

The agreement will leverage a project announced by Bruce Power last week to produce Lutetium-177 used to treat prostate cancer with production starting in 2022 following regulatory and other approvals. By working together on the Lutetium project, Bruce Power and SON will engage on marketing and collaboration while working with government to leverage this opportunity and create sustainable economic benefits.

“This is a historic partnership between Bruce Power and the SON that will see us join forces in the fight against cancer worldwide as we work to develop new isotopes, starting with Lutetium-177,” said Mike Rencheck, Bruce Power’s President and CEO. “By working together we can find innovative ways to market and promote this global leadership opportunity for both Ontario and Canada while creating economic benefits for SON.”

Bruce Power and SON have been exploring this opportunity to work together for several months, and this agreement followed extensive dialogue and community engagement sessions at both Saugeen First Nation and the Nawash Unceded First Nation in June and July.

“Many of our community members have been impacted by cancer in some way, and I believe that working with Bruce Power on the next generation of life-saving isotopes in the SON Territory is an opportunity for us to have a positive impact on the people and families touched by cancer,” said Greg Nadjiwon, Chief of Chippewas of Nawash Unceded First Nation. “This is a historic partnership not only for us here in our Territory as the Saugeen Ojibway Nation, but it is bigger than us as we work to develop a project that will be important for Canada and the world.”

The partnership will seek to build on an announcement last week where Bruce Power teamed up with Kinectrics and Framatome Canada Ltd. to develop an Isotope Production System deployable on all Bruce Power units that can also support the future production of other isotopes in addition to Lutetium-177. This will leverage the multi-unit Bruce Power site to provide a stable, redundant supply for many decades to come.

“This partnership will allow us to jointly market this project and engage governments to align this Project with their priorities and goals. We will be playing a leadership role in the fight against cancer and at the same time building economic opportunities within the SON Territory and for our SON Communities and Community members,” said Lester Anoquot, Chief of Saugeen First Nation.

This will leverage the multi-unit Bruce Power site to provide a stable supply for many decades to come which is welcome news to the 1-7 men diagnosed with prostate cancer.

“An average of 11 Canadian men die from prostate cancer every day. We’re working with our partners to change that statistic by developing innovative radioisotope treatments,” said Peter Coleridge, President and CEO, Prostate Cancer Canada. “Radioisotopes play a crucial role from diagnosis to treating advanced forms of the disease for which there is no cure. That’s why we’re excited about new treatments in the pipeline that are giving men and their families hope for the future. Together, we can save and improve more lives.”

Bruce Power is a founding member of the Canadian Nuclear Isotope Council (CNIC), whose members are working together to ensure Canada remains a world leader in the production of life-saving radioisotopes by raising awareness and supporting long-term policies at the domestic and international level.

“This partnership between Bruce Power and SON will send a strong message across Canada and the world that we are committed to doing our part in the fight against cancer by ensuring our country remains at the forefront of isotope innovation and supply,” said James Scongack, Chair of the Canadian Nuclear Isotope Council. “A partnership of this nature will create a needed export and supply opportunity for Lutetium-177 and can align well with many public policy priorities at both the provincial and federal level.”

Kim Rudd, MP for Northumberland-Peterborough South and a strong advocate for the nuclear industry in Canada, offered praise for the announcement.

“Our government has been committed to renewed relationships with Indigenous peoples, based on reconciliation and recognition of rights, respect, and co-operation. This partnership between the Saugeen Ojibway Nation and Bruce Power to collaborate on isotope production will not only help to expand Canada’s leadership role in the global community by supporting new and innovative patient treatments, but also demonstrates a real commitment to working hand in hand with our indigenous partners to ensure shared prosperity, for themselves, their families and their communities.”

Bill Walker, Associate Energy Minister and MPP for Bruce-Grey-Owen Sound who attended the announcement, congratulated all involved for the innovative new partnership.

A joint Bruce Power and SON website has been launched to share more information on the partnership and on the project. It can be found at the Fighting Cancer Together website.