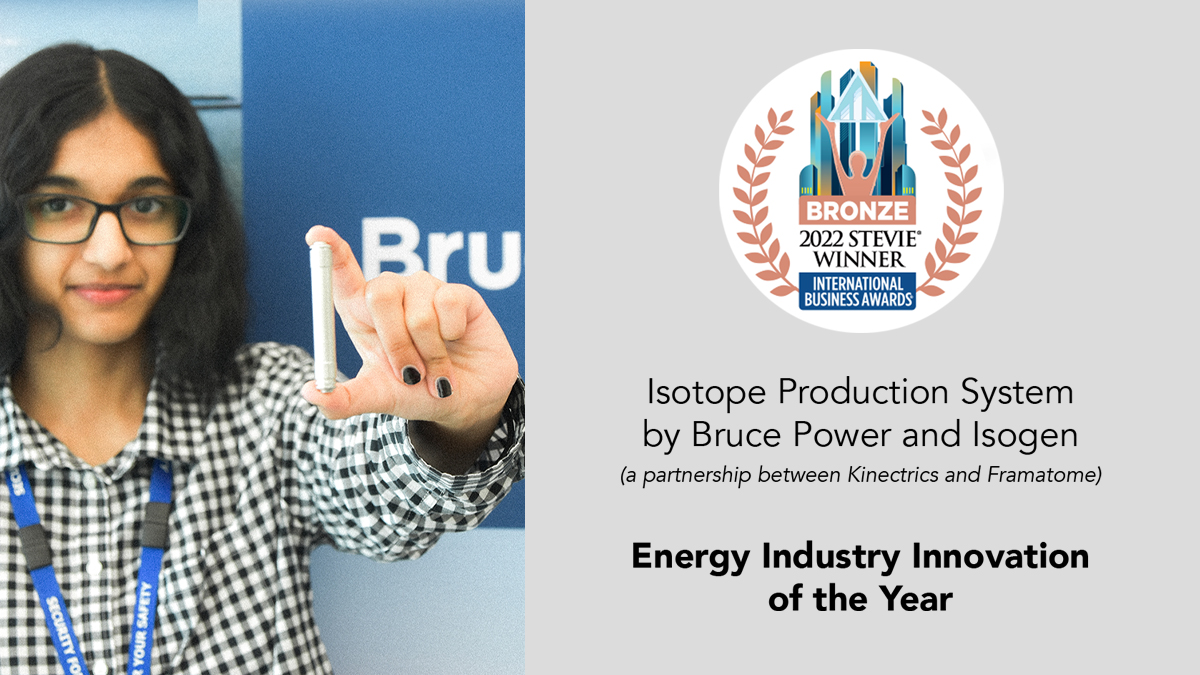 Bruce Power has been named the winner of silver and bronze Stevie® Awards in the 19th Annual International Business Awards®.

Bruce Power’s innovative Isotope Production System (IPS), installed this year in partnership with Isogen (a joint venture between Framatome and Kinectrics), was given a bronze distinction in the Energy Industry Innovation of the Year category.

The IPS, installed during the Unit 7 planned outage early this year, made Bruce Power the first company to produce cancer-fighting Lutetium-177 in a commercial reactor and it will soon be available to the world medical community. Bruce Power is also exploring the production of other medical isotopes, notably yttrium-90, using the IPS.

Bruce Power’s 2021 Annual Review and Energy Report were given a silver award in the Best Annual Report category.

“Both of these awards reflect on the great work we’ve been doing and we’re proud that our efforts have been recognized in the international business community,” said Pat Dalzell, Bruce Power’s head of Corporate Affairs. “Our Isotope Production System will be a game-changer for the world medical community, providing a stable, steady supply of cancer-fighting isotopes, and we’ve only just scratched the surface of its capabilities.”

Bruce Power’s Annual Review and Energy Report, presented in a striking coffee table book format and an online version, told the story of the company’s 2021 production, innovation and social responsibility through the pandemic as it marked its 20th anniversary.

“Bruce Power’s Annual Report is visually attractive and vibrant,” the judges said. “The content balance between the business context (and impact for the local community) and the technical detail of the energy supply is appropriate, resulting in an accessible and educational read that leaves the reader feeling well informed.”

The International Business Awards are the world’s premier business awards program. All individuals and organizations worldwide – public and private, for-profit and non-profit, large and small – are eligible to submit nominations. The 2022 IBAs received entries from organizations in 67 nations and territories.

More than 3,700 nominations from organizations of all sizes and in virtually every industry were submitted this year for consideration in a wide range of categories. Stevie Award winners were determined by the average scores of more than 300 executives worldwide who participated in the judging process in June and July.

Details about The International Business Awards and the lists of Stevie Award winners are available at www.StevieAwards.com/IBA.

About the Stevie Awards