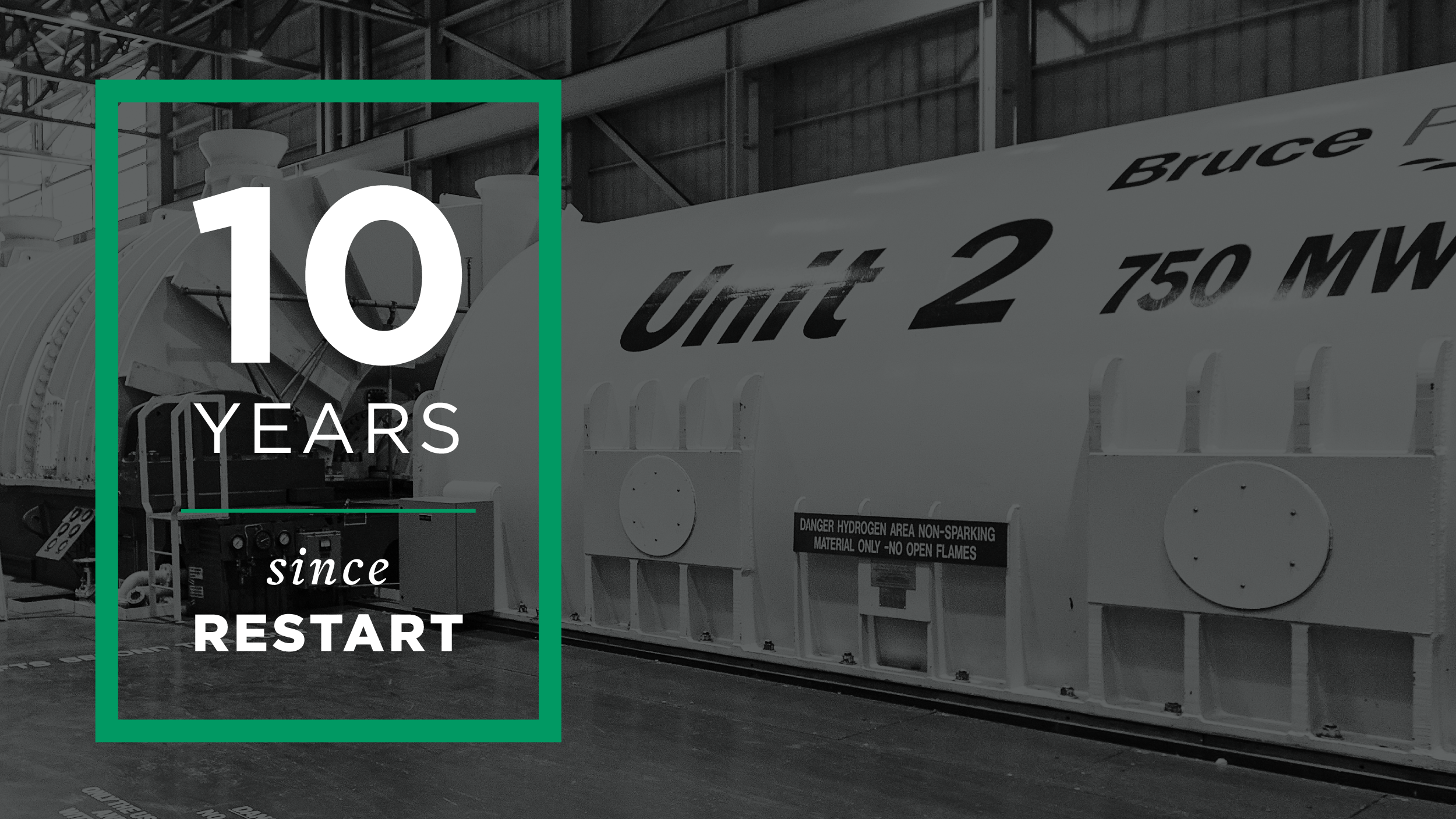 Bruce Power is celebrating 10 years since the successful conclusion of the Bruce A Restart Project and its return to an eight-unit site.

Over the past decade Bruce Power has reliably produced 30 per cent of Ontario’s electricity, while keeping our air clean by providing 70 per cent of the carbon-free electricity Ontario needed to shut down its coal plants, which it accomplished in 2014.

The 1990s represented a dark time for our communities after all Bruce A units were shuttered when the province was facing the largest surplus capacity of electricity in its history. When Bruce Power was formed in 2001, it committed to restart Units 3 and 4, which it did by 2004, paving the way for the Units 1 and 2 Restart Project.

“The Bruce A Restart project was a big success for the area. It’s continued production of clean electricity contributes to economic stability and secure jobs for thousands of people in communities across Huron-Bruce,” said Lisa Thompson, Member of Provincial Parliament for Huron-Bruce. “Given the commitment of Bruce Power to continue with its refurbishment priorities, I am confident In Bruce Power’s ability to generate continued positive economic impacts in Huron-Bruce, and in terms of satisfying clean energy needs here at home and throughout Ontario for decades to come.”

Now, with nuclear enjoying a renaissance as a recognized source of clean energy around the world, Bruce Power is again leading the way, reliably supplying 30 per cent of Ontario’s electricity to help meet the province’s increasing demands.

“Bruce Power and the nuclear industry were instrumental in helping to phase out coal in Ontario over the past decade. As a result, we enjoy one of the cleanest electricity grids in the world today,” said Ontario Energy Minister Todd Smith. “Nuclear will continue to play a key role in supplying our people and businesses with safe and reliable power for many more years. It is an integral part of Ontario’s clean energy future.”

A 2022 report from GHD Limited showed that Ontario produced a quarter (26 per cent) of Canada’s overall electricity in 2019, but accounted for only six per cent of the country’s total emissions from electricity generation, with nuclear power providing 60 per cent of Ontario’s energy needs daily.

“Nuclear is playing a key role in Ontario’s clean energy mix and our investments into extending the life and output capabilities of our units will help to ensure the people, hospitals and businesses continue to have a reliable source of electricity,” said Mike Rencheck, Bruce Power’s President and Chief Executive Officer. “With the return to service of Units 1 and 2 in 2012, and their strong performance over the past decade, we’re showing that investments into existing nuclear assets build on Ontario’s nuclear advantage and will help achieve climate targets.”

With the Unit 6 Major Component Replacement (MCR) Project progressing and plans in place to refurbish Units 3, 4, 5, 7 and 8 over the next decade, Bruce Power is committed to helping the province achieve its Net Zero goals.

As part of Project 2030, Bruce Power will increase its production from its current 6,550 Megawatts (MW) of eight-unit capability to 7,000 MW through innovation and the optimization of existing assets, which is equivalent to adding a ninth unit to the site without the need to build new infrastructure. By 2034, following completion of the MCR Projects, the output of the facility will result in the avoidance of 15 million metric tonnes of CO2e per year from carbon-emitting sources.

Learn more about Project 2030 and the resulting displaced emissions by clicking this link.